I had an accident on my 50cc Scooter about 2 weeks ago on Wednesday the 16th of September 2015 at about 5pm. I'm ok. Just hurt my big toe. But it's ok now. My scooter front wheel and guard were damaged in the accident and possibly the front forks.

So far all seems to be going well with the people seeking parts to replace what was damaged.; It wasn't my fault. I was coming upto a giveway sign and a big toyota hilux came round on wrong side of road cutting the center line and caught and run over my front wheel. I was going pretty slowly so I just was able to jump off. I was like 1 metre from the giveway sign.

I remember thinking when I pick up my broken bike to check where it had fallen to see if I had crossed center line or something. It had fallen away from me and even the handle bars were inside the center line. The Hilux was well wrong and at fault.

It was very violent. It could of been much worse. I could've been killed.

I really need a car now to be safe. But i'm poor.

It's put me right off scooters.

It wasn't my fault I was hit unawares from out of no where before I even new what was happening. I even did the exact opposite thoughts thing that I should of in such an emergency. It was over so quicky but my thoughts and reaction were all wrong and I should've been jumping out of the way or something. I reacted poorly. I won't make it if I have to rely on my reactions vs thinking on what to do to save me or someone else in a life threatening emergency.

I don't think there is anything that can speed me up and make me more "onto it" as they say.

Here are some photos: 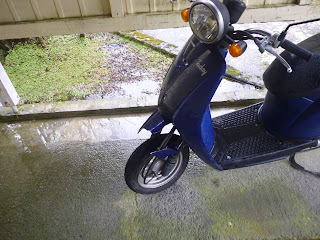 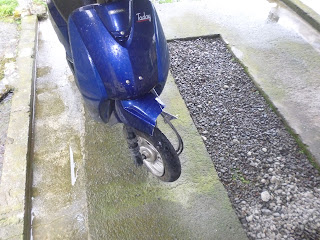 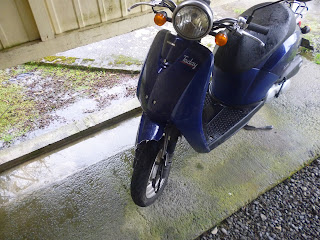 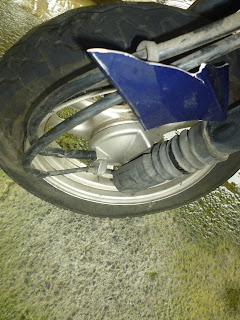 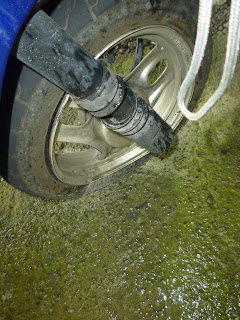 Hopefully soon enough i'll be rich and able to afford a car. Rich to me is like $450k.
I am expecting some money for my September 11th World Trade Center Phone call. Can only be patient and wait. A car would be safer. Really need to upgrade to a car for safety now. The scooter accident was violent. But i'm safe. But it really put me off riding a scooter now. If the scooter ever gets fixed and I have to ride it again i'm going to be ever so careful and dreaming of a car the whole way.
Buy me a car if your wealthy.
Posted by ProBegger at 4:22 AM No comments:

Place To Call My Own.

1379 hits so far on this website at todays date the 28/02/09. Not very many. I'm bored pretty much with it because I haven't made any money. The first post on this web page is dated the 27/04/07 so coming up two years that it's been running. The first post was talking about donate to me to buy me a scooter. Well I have a scooter now. Done almost 1000km since i've had it. I fill it up every payday and the last 3 weeks in a row its cost me $3 NZ to refill it to the top again though not sure how many km's im doing but $3 dollars is very affordable. The only other cost really for it is the registration which is $25 every 3 months which is also very affordable. It needs an oil change at the moment really but i can't afford.

The only problem with a scooter is it's very cold sometimes or if it's raining like now. Also you can always fall off and get hurt possibly die.

1379 hits. If I was more active on this page I would receive more hits. I haven't been fully active mainly because of World Of Warcraft. One thing for those who play, if your an enchanter and you haven't already start selling your enchants on the auctions house. I've made 20,000 Gold so far and counting. Good ones are Super Stats, Exceptional Spell, Greater Fort, Bracers - Striking, Shield - Defense, Greater Defense, Cloak - Speed, Greater Assault, Major Agility, search for those exact words in the wow auction house and see if u can make a profit on your server. Sometimes the market can move very fast so if the price is low with not much profit the next day it might not be. I sold 9 super stats in 2 hours one day making 70g profit on each one clear. Just buy the vellum, infinite dust, and cosmic essence, off auction house create the chant and sell it. So now I have 21,000 Gold sitting in the bank with 2 toons already with epic flying. But Alas i'm now very bored with World of Warcraft and have almost stopped playing.

Anyway, What i'm really after is a house. If you want to, if your willing, please donate me some money. I've never got any donations yet in nearly two years so you could be the first. Yay. Using your credit card you can donate me some money by clicking on the paypal button. Yay. But anyway i'll be suprised if I receive a donation. Ok thankyou. Check out where i'm living theres a video on this page some where showing you my house. I really need a new house a place to call my own.
Posted by ProBegger at 4:41 PM No comments:

Email ThisBlogThis!Share to TwitterShare to FacebookShare to Pinterest
Labels: 50cc, Buy Me A House, Buy me a Scooter, Donate, Donate to me, Scooter, World of Warcraft

My Grandma just died a few weeks ago June 15th 2007 86 old a week from her 87th birthday which is a long life. She was mostly healthy up till about 18 months before her death and she passed away peacefully in her sleep.

I saw her mostly as a kid and less frequently as I got older. My brother and I used to stay with her alot and we would go fishing off the dock in Foxton NZ where she used to live. Thats what I mostly remember. I always saw her at family Christmas gatherings and such in later years which was always good. She mostly remembered my name too as she was known for mixing peoples names up.

Something really great for me that she has done is left me an inheritance. I've been told about $5000 dollars but I don't know yet. Thats like heaps for me. The most money I will of ever had at one time.

I don't have any debts so i'm able to purchase a few things that I have on my wishlist. I'm going to buy a 50cc Petrol Scooter $2000, A 30GB Harddrive Video Camera $1000 and spend $2000 on a completely new computer with 20" screen, 2 x SLI 512mb video cards and 2GB dual channel ram. I'll have two complete computers and should get at least three years out of the new one and longer. My current computer cost me $800 and i've had 2 years out of it so far.

I had added a scooter and video camera to my wishlist in this blog when it first began so that completes those orders and I can cross them of my wishlist. The things that I have left on my wishlist are not total necessities now except for a house. A house is the most important thing that I need.

Anyhow with a scooter now I will be able to rent a house farther from town so I should be able to get better quality and cheaper accomodation (until the fateful day I purchase my own house). With a video camera I will be able to earn money by making videos and posting them on metacafe which pay US $100 for every 20000 thousand views your video gets. A scooter and video camera both unlock some of the doors of my world to new and better things in many ways. Heaps of thanks Grandma.

By Grandma I will miss you. I remember you.


From Darcy.
Posted by ProBegger at 1:25 AM No comments:

I've been running a blog for a little while now on a free webhost and decided I should set up a blog here as well. My other blog can be found at www.moviez.co.nz. I don't know what i'm going to write about yet but i'll just see what happens. Blogger.com where this blog is hosted is one of the most trafficed sites on the internet so there must be possibly an advantage to running a blog here.

I guess firstly what I want to achieve from this blog is to make money. I started with my other blog wanting to make money for a house but i'm about to change that to making enough money for a 50cc petrol scooter which is a much easier target. For a 50cc scooter I need to make about $1800 NZ dollars. So for all my websites now i'll try and make about $1800 NZ dollars for a scooter. It takes time to make money and you need to do alot of blog entries for content so readers have something to read and search engines can find you. You also need to set up a network of other blogs and websites linking to you and you linking to them. Traffic from other websites can be a big source along with search engines.

As an introduction my name is Darcy Robert Lee, I live in New Zealand and am 28 years old, 29 on the 11th of May 2007. I don't work or anything other than now just beginning to set up websites and stuff. My other site has been going for about 6 months now and it's only just starting to be found in the search engines. I've seen other blogs and they have done much better. So yah I want to make enough money for a scooter and then other things hopefully eventually a house. I'll tell you more about me as time goes along. Unfortunately i'm kinda sick and a little crazy so my posts could get silly at times but I have to take the risk to try and earn some money.

That was my first post.
Posted by ProBegger at 2:24 PM No comments: